Chinese Premier Li Keqiang delivered a government work report on behalf of the State Council to the legislature for deliberation.

The following are key points of the government work report: 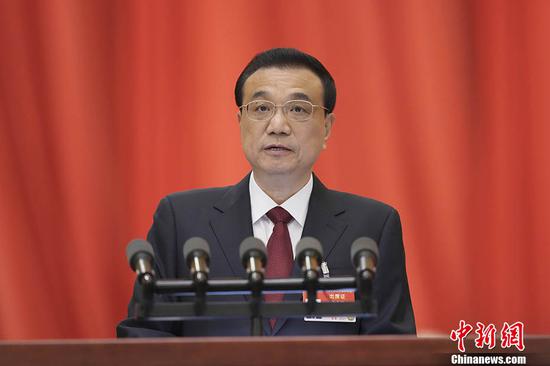 Chinese Premier Li Keqiang delivers a government work report at the opening meeting of the fourth session of the 13th National People's Congress in Beijing on March 5, 2021. (Photo/China News Service)

China aims to expand its gross domestic product by over 6 percent year on year in 2021, with more efforts on reform, innovation and high-quality development, according to a government work report submitted Friday to the national legislature for deliberation.

China will implement opening-up policies in a wider scope, broader areas and at a deeper level and better participate in international economic cooperation.

The country will push the stable development of both imports and exports, with measures to foster new business models including cross-border e-commerce.

China to improve systems, mechanisms in its SARs

China will improve systems and mechanisms relating to implementing the Constitution and the basic laws in its special administrative regions (SARs).

China lowers deficit-to-GDP ratio target to around 3.2 pct for 2021

China plans to cut the ratio of its deficit to gross domestic product (GDP) to around 3.2 percent for the year of 2021.

China will consolidate its poverty relief accomplishments to prevent a large number of people from falling back into poverty.

China will take prudent measures to advance the internationalization of RMB, according to the draft outline of the 14th Five-Year Plan.

China to plan for future industries

China aims to raise its urbanization rate to 65 percent during the 2021-2025 period, according to a draft outline of the 14th Five-Year Plan.

China vows to resolutely prevent and contain external interference in Hong Kong and Macao affairs, according to the draft outline of the 14th Five-Year Plan (2021-2025).

China will participate in the pragmatic cooperation on the Arctic and the building of a "Polar Silk Road," according to the draft outline of the 14th Five-Year Plan.

China will adopt a more open policy for talents, aiming to create a sci-tech innovation highland that gathers talents from both home and abroad, according to the draft outline of the 14th Five-Year-Plan.

Wang Chen, vice chairman of the NPC Standing Committee, delivered an explanatory speech at the opening meeting of the fourth annual session of the 13th NPC.

Stressing the imperative and importance of improving the electoral system, Wang said the rioting and turbulence that occurred in the Hong Kong society reveals that the existing electoral system in the HKSAR has clear loopholes and deficiencies, which the anti-China, destabilizing elements jumped on to take into their hands the power to administer the HKSAR.

Necessary measures must be taken to improve the electoral system and remove existing institutional risks to ensure the administration of Hong Kong by Hong Kong people with patriots as the main body, Wang said.

A two-step approach, namely, "decision plus amendment" was proposed to improve the electoral system of the Hong Kong Special Administrative Region.