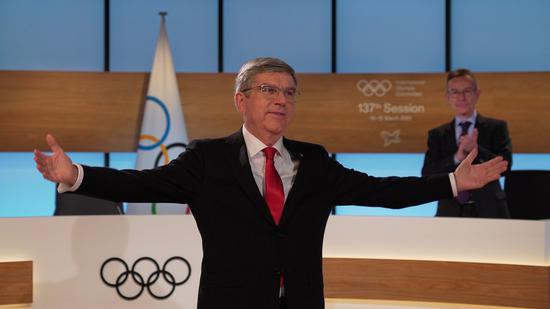 IOC Thomas Bach is re-elected as IOC President through to 2025. (Photo by Greg Martin/IOC)

Thomas Bach, the incumbent president of the International Olympic Committee (IOC), has been re-elected for an additional four-year term that is to conclude in 2025, the IOC said on Wednesday.

As the only candidate, Bach earned 93 votes, one veto and four abstentions on Wednesday during the 137th IOC's Session which is held online. His current term as the IOC president will finish on the closing day of the Olympic Games Tokyo 2020 on Aug. 8 this year, and the second term will start immediately after, and will conclude in 2025.

"Thank you very much from the bottom of my heart for this overwhelming vote of confidence and trust. For me, this is even more overwhelming considering the many reforms and the many difficult decisions we had to take, which affected all of us," said Bach after his re-election.

In his speech at the IOC session, he said that "we learned during this coronavirus crisis, the hard way, that we can live up to our Olympic slogan 'faster, higher, stronger,' in sport and in life, only if we are working together in solidarity."

Therefore he suggested that the slogan may be complemented by "adding, after a hyphen, the word 'together': 'Faster, higher, stronger - together'. This could be - from my point of view - a strong commitment to our core value of solidarity, and an appropriate and a humble adaptation to the challenges of this new world."

As an athlete, Bach was a world-class fencer, winning the Olympic gold medal, but also two gold medals with the German foil fencing team at the World Championships in Montreal in 1976 and in Buenos Aires in 1977.

The 66-year-old served as IOC vice president from 2000 to 2004, 2006 to 2010 and from 2010 until his election as IOC president in September 2013. During his presidency, he received the prestigious Seoul Peace Prize in October last year. In 2019, he was awarded the Cem - Papandreou Peace Award in Athens, which is given to individuals and groups who have made "an outstanding contribution to peace."