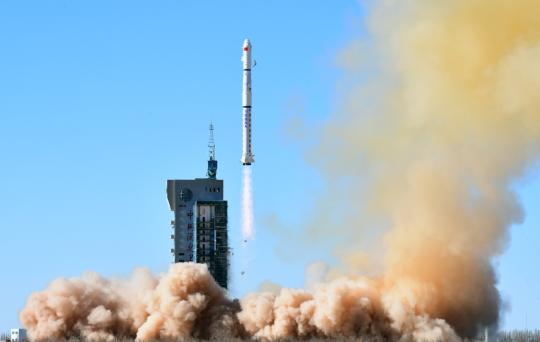 Bao Weimin, the company's director of science and technology and an academician of the Chinese Academy of Sciences, said five flights have been scheduled this year for the Long March 11, the only model in the company's Long March rocket family that burns solid fuel.

"We plan to make sea-based launches a regular procedure for the Long March 11 because engineers have overcome all technical difficulties in seaborne missions, and also because sea-based launches have many advantages that land-based missions don't have," the scientist said.

A seaborne mission is less likely to cause trouble for densely populated areas along the rocket's trajectory.

It also allows launches at favorable locations such as near the equator, which helps to increase a rocket's carrying capacity, lowers costs and extends the life span of some satellites, Bao said.

The Long March 11 is 20.8 meters long, with a diameter of 2 meters and liftoff weight of 58 metric tons. It is capable of sending satellites into low-Earth orbit or sun-synchronous orbit. Its first flight was in September 2015 from the Jiuquan Satellite Launch Center in northwestern China's Gobi Desert.

The rocket has been used in 11 launches－nine at land-based launch centers and two from ships－that placed more than 50 satellites into orbit.

Designers have begun to develop an upgraded version of the Long March 11, called Long March 11A, which will be more powerful than the existing model, Bao said.

The Long March 11A will be able to send a 2-ton satellite into low-Earth orbit. It is expected to have its maiden flight within two years, he said.

China is now the only nation that is independently able to carry out sea-based space launches.