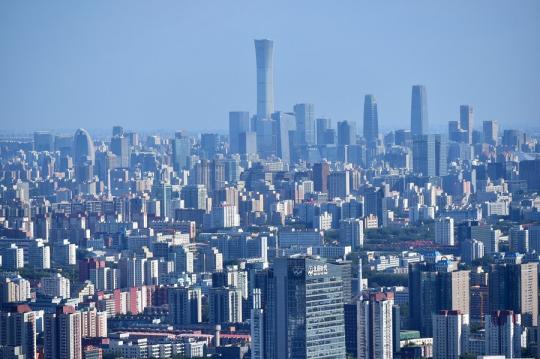 Photo taken on Sept 9, 2020 shows the view of the skyscrapers of the Central Business District (CBD) in Beijing. (Photo/Xinhua)

China will align with high-level international economic and trade rules as it pushes to establish a new system for a higher-level open economy, a top commerce official said on Monday.

The nation may use some high-level rules as stress tests in free trade zones with supportive conditions, while directly applying some when the conditions are ready, Commerce Minister Wang Wentao said at a news conference in Beijing.

"FTZs have been playing a very positive role as pilots for reform and opening-up, and at the national level, we have launched 278 institutional innovations, while the construction of the Hainan Free Trade Port also progresses steadily," he said.

For the next step, the consensus is to follow international economic and trade rules to expand higher-level opening-up, he said.

China has been expanding opening-up in a larger scope and at a deeper level. Opening-up is the path China must follow to achieve national prosperity, according to Wang.

The Regional Comprehensive Economic Partnership agreement, signed by China and 14 other economies in November, the China-EU investment treaty, for which negotiations were completed at the end of the year, and the Comprehensive and Progressive Agreement for Trans-Pacific Partnership, which China is giving active consideration to joining, represent the high level of international economic and trade rules, according to Zhang Yansheng, chief researcher at the China Center for International Economic Exchanges.

As the world's second-largest economy, second-largest consumer market and largest exporter, China has shortened its national negative list to 33 items, while the figure for FTZs is 30.

A negative list refers to special administrative measures prohibiting the access of foreign investment in certain industries or areas.

China also has eased restrictions on foreign investment in industries such as automotive, finance and securities, and has expanded comprehensive pilots and demonstrations for wider opening-up in the services sector.

Wang said the nation will further downsize the negative lists.

He added that China will work harder to improve supervision, safeguard industrial and supply chains, properly respond to economic and trade frictions, and avert major risks.

Experts said as China's economic growth has shown signs of slowing down, expanding opening-up is an effective way to inject new growth impetus and help propel the global economy.

"But such practices can promote fair competition among foreign, private and State-owned enterprises, enhance the operational efficiency of market entities and help boost economic growth," he said.

Zhang said the nation should build a market that is more transparent, law-abiding and aligned with international rules, in order to avoid situations where foreign investors entering it cannot register and operate properly, due to administrative and other types of obstacles.