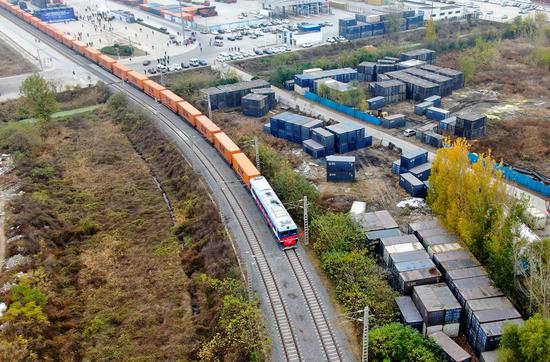 Global gross domestic product (GDP) will grow at 5.6 percent this year if vaccination rollout is fast and effective enough across the world, the Organization for Economic Cooperation and Development (OECD) said Tuesday in its Interim Economic Outlook.

The forecast was 1.4 percentage points higher than the Paris-based organization's December prediction.

In its Interim Economic Outlook, the OECD predicted world output is expected to reach pre-pandemic levels by mid-2021 and the world economy is expected to grow by 4 percent in 2022 after a 5.6-percent growth in 2021.

"A global economic recovery is in sight but a faster and more effective vaccination rollout across the world is critical," it stressed.

The OECD projected the United States economy to grow at 6.5 percent in 2021 thanks to "the large-scale fiscal stimulus now planned with a sustained pace of vaccination".

In the euro area, "where the level of fiscal stimulus is lower and vaccine rollout slower," the OECD sees GDP rising 3.9 percent in 2021.

"Prospects are brighter in the Asian-Pacific region where several countries have effectively contained the virus and where industrial activity has regained dynamism. In China, GDP growth is projected to be 7.8 percent this year; in Japan 2.7 percent; in (South) Korea 3.3 percent; and in Australia 4.5 percent," it said.

China aims to expand its economy by more than 6 percent in 2021, according to a Chinese government work report.

"The recovery is likely to be more moderate in the emerging market economies of Latin America and Africa amid a resurgence of the virus, slow vaccine deployment and limited scope for additional policy support," it added.

"Speed is of the essence," said OECD Secretary-General Angel Gurria. "Vaccines must be deployed faster and globally. This will require better international co-operation and co-ordination than we have seen up to now. It is only by doing so that we can focus our attention on building forward better and laying the foundations for a prosperous and lasting recovery for all."

"Widespread vaccination of the adult population is the best economic policy available today to get our economies and employment growing again," she said. "If we are at war with the virus then we need to put vaccine production on a war footing, provide the necessary resources and speed up deployment across the world.

"If we don't get enough people vaccinated quickly enough to allow restrictions to be lifted, the recovery will be slower and we will undermine the benefits of fiscal stimulus," she added.