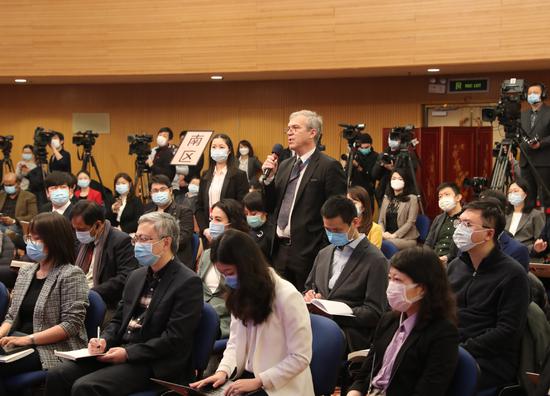 A reporter raises a question to State Councilor and Foreign Minister Wang Yi at a press conference on March 7 during the fourth session of the 13th National People's Congress, China's top legislature. (Photo by Wang Jing/China Daily)

With a broader vision and deeper understanding of the country and the world, the Chinese public will not remain silent on biased and even fake news cooked up by some Western media, national political advisers said. The public has become more conscious of the political agenda behind those reports and is confident enough to air disapproval and anger.

"In the past, members of the Chinese public were not used to, or could not, communicate smoothly with the world. As they enjoy better living standards and become more confident, they now have the time and capability to express their disappointment over inaccurate information about China and openly discuss it," said Ji Zhiye, a member of the 13th National Committee of the Chinese People's Political Consultative Conference and former head of the China Institutes of Contemporary International Relations.

As China is increasingly integrated into the world, Ji said, the Chinese public is bound to notice that some Western media are accustomed to exaggerating certain aspects, and often jump to conclusions with partial facts from individual cases while ignoring the full picture.

"Chinese people's understanding of their country and the world is getting more comprehensive and deeper. So it's not surprising to see that many people are angry at some Western media organizations with a strong bias against China," said Huang Ping, a CPPCC National Committee member and former director of the Chinese Academy of Social Sciences' Institute of European Studies.

On Monday, Foreign Ministry spokeswoman Hua Chunying forwarded a post on Twitter featuring a photo of a group of foreign reporters flocking to take pictures of a member of the armed police on guard duty at Tian'anmen Square in Beijing during the plenary session of the ongoing annual National People's Congress.

"How to take a 'standard' photo of China by Western standards? Must include: Chinese flags, police, traffic cams, long focus, low angle and gloomy filters. Mustn't include: blue sky, smiling passersby, an objective view of China," she wrote.

The BBC's recent stories alleging "systematic abuses" of Uygur ethnic women in the Xinjiang Uygur autonomous region, and cooking up so-called human rights violations in Wuhan, Hubei province, with a video of an anti-terrorism drill, have also aroused anger among Chinese people.

The popularity of social media platforms offers ordinary Chinese people a channel to air their sentiment and views. A video blogger nicknamed Damo Uncle recently posted a video on various social media platforms mocking the BBC for using tricks to distort news through deliberate shooting angles and post-production techniques including changing the lighting of clips, which he dubbed an "underworld filter".

He said he made the video because he cannot stand seeing how little fact there is in many Western media reports on China.

"That's like, I've already moved into a comfortable, two-story house but they insist that I'm still living in a shelter. It's so far from the truth. That's why they have become the laughingstock among the Chinese people," said Damo Uncle, who only wished to use his social media nickname.

Damo Uncle, a documentary production insider, has more than 8.74 million followers on Sina Weibo, a popular microblogging platform, as well as video-sharing platforms Douyin and Bilibili. The video, posted on Feb 1, had been viewed more than 21.3 million times by Tuesday and received about 3.3 million likes.

"We welcome criticism on China, but it should be fair and based on facts. Criticism based on lies and obvious double standards is meaningless," he said.

With better education and broader horizons, many Chinese people nowadays are capable of identifying reports with obvious political agendas that arise from being ignorant about China.

"There are many Western media reports and documentaries produced by foreign media outlets that present China objectively, or offer sincere and constructive suggestions. We value them," he said. "But like most of my followers, what I cannot stand is those packed with subjectivity."

On Sunday, State Councilor and Foreign Minister Wang Yi said that no matter how the world changes, the media should stand by their professional ethics. "Foreign journalists should not apply any filter to their cameras, whether one of beauty or gloom, when reporting on China. Truthful, objective and fair stories will always appeal to people and can stand the scrutiny of history," he said while meeting with the media.

On March 2, UK Ambassador to China Caroline Wilson posted an article titled "Do foreign media hate China?" on the embassy's WeChat social media platform. Many Chinese people were angered by her words, not only because of the prejudices that characterize Western media's reporting on China, but also because of their double standards.

The head of the European Affairs Department of China's Foreign Ministry summoned Wilson on Tuesday and lodged solemn representations over the article. The Chinese diplomat said the article posted by Wilson was full of ideological prejudice and double standards, and such commentary is inappropriate for a foreign diplomat.

Damo Uncle said he will continue to speak out and make more videos about how some Western media use shooting and editing techniques to make up stories about China without presenting the full picture, because there are so many examples.

"We don't hate the Western media outlets. Many documentaries produced by BBC are of very high quality and many reports by foreign media have truly recorded many aspects of Chinese society," he said. "But we do hate the fact that some of the Western media deliberately choose to turn blind eyes to facts that are right in front of them," he said.

"As China is becoming stronger and her people understand the world better, we want to have fairer treatment," he said.