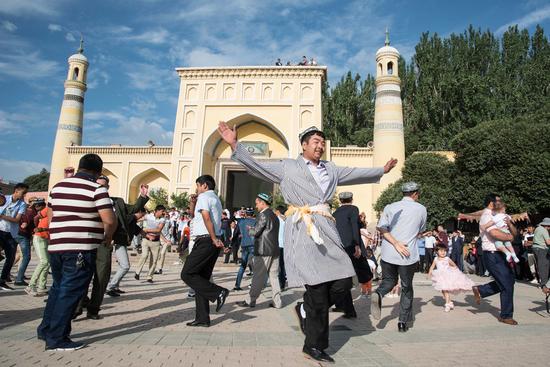 Yang Jie, an imam in China's Xinjiang Uygur Autonomous Region, has always been something of a trendsetter in Hutubi County, as he was among the first to ride a motorbike, use a cellphone, buy a car, and post short videos on video-sharing platforms.

"With our lives in Xinjiang continuously improving in recent years, more and more believers have become trend-followers like me," said Yang, who is in Beijing attending the ongoing annual session of the National Committee of the Chinese People's Political Consultative Conference (CPPCC), the country's top political advisory body.

Like other committee members, Yang regularly conducts research on and collects suggestions and concerns of the public about issues related to various social programs and the people's livelihood. The political advisors then put forward suggestions or criticisms to the state organs and other relevant organizations through recommendations, proposals and other forms.

This year Yang submitted to the session a proposal on improving Xinjiang's rural power grid to benefit the region's future development.

Yang, 54, has been an imam in the county for nearly 20 years. He said the development and progress that have taken place in his hometown over the past four decades are hard-won and remarkable.

Last year, Xinjiang, along with the rest of the nation, eliminated absolute poverty, a historic feat for the vast region and the country alike.

Public services at Xinjiang's religious sites have also been improved a lot. Apart from basic infrastructure, most of the mosques are equipped with libraries, air conditioning, computers, medical services and other facilities, said Yang.

Every Friday, many Muslims go to the mosque to listen to Yang's teaching of the Koran. Yang said he usually teaches the Koran in association with traditional Chinese culture to help followers understand easily.

"I always tell people that to be a good religious person, one should first be a good citizen," said the imam.

In Xinjiang, people's freedom of religious practice is fully respected. According to Yang, Islam, Buddhism, Christianity and Catholicism coexist in Hutubi, where people of some 25 ethnic groups live in harmony.

"Most people coming to my mosque are of the Hui, Uygur, Dongxiang and Kazak ethnic groups," said Yang. "As long as it is a normal religious activity, no one interferes."

Yang said such activities can be carried out in mosques or in people's homes according to their religious traditions. "It is totally of their own wills," he added.

The customs in religious festivals, food, burial and marriage of ethnic minorities are also fully respected and everyone feels happy, he said.

The mosque also has a self-management committee, comprised of high-prestige figures selected by followers to manage the daily affairs of the mosque, he added.